6 Major AI Use Cases in IT operations

Data volumes generated by IT infrastructure are increasing two-to-three fold every year.

When Woolworths, Australia’s biggest supermarket chain, suffered a nationwide IT outage, the company was forced to shut checkouts, have shoppers leave their groceries and close stores. The 30-minute outage resulted in millions of dollars of lost revenue for the company.

Similarly when the German unit of British-based telecommunications company – Vodafone,  faced a 3-hour outage due to failure of control systems, more than 100,000 users got cut off.

The fact of the matter is that IT teams today need to constantly analyze an unprecedented amount of data and use multiple tools that monitor data. This is resulting in extended delays to identify and solve issues.

Moreover, a single outage can trigger thousands of alerts, logs, and events. In a complex IT infrastructure consisting of several siloed apps and databases, and characterized by an ever-increasing number of IT services and servers, heavy reliance on manual processes to identify the root cause of the problem can severely hamper the functioning of business operations.

In addition, ITOps teams usually work in disconnected silos, making it even more difficult to ensure the most urgent incident at any particular time is prioritized and addressed.

That’s where businesses are turning to AIOps to resolve high impact IT operations problems. Gartner coined the term AIOps in 2016, defining it as

software systems that combine big data and artificial intelligence (AI) or machine learning functionality to enhance and partially replace a broad range of IT operations processes and tasks, including availability and performance monitoring, event correlation and analysis, IT service management and automation.

AI use cases in IT operations

Use case #1: Predictive IT Maintenance

As important it is to diagnose IT issues once detected, what is equally essential is the power to proactively predict future incidents and automate fixes before they impact business operations.

Owing to the complex, dynamic nature of today’s IT environments, legacy performance-monitoring systems no longer suffice in spotting anomalies and predicting future IT outages.

However, the infusion of artificial intelligence in IT operations  improves infrastructure and application performance, reliability, and uptime by predicting and preventing business-critical outages, while also reducing operations and maintenance expenditures.

In addition, historical utilization trends of critical infrastructure resources are studied to predict when an infrastructure device will reach full capacity, ensuring more capacity can be added automatically or through manual intervention to avoid business outages due to capacity constraints.

One of the major functions of AIOps is to ensure the security of the IT infrastructure. As a majority of organizations function in the hybrid setup, with hundreds of applications running on-cloud and in on-premise data centers, it becomes increasingly tough to monitor such a vast environment.

AIOps leverages complex algorithms to detect botnets, scripts, and other threats in real-time, even those which are multi-vectored and layered, ensuring reduced network downtime and continuity in business service.

Use Case #3: Root cause analysis

AIOps tools can not only detect anomalies but also investigate the root cause of issues and develop relationships among abnormal incidents. This enables early detection and diagnosis of IT issues. IT teams will have improved visibility into correlation between incidents and better information about the primary cause. This in turn, helps reduce MTTA/R significantly.

As mentioned above, the smallest of IT incidents can trigger thousands of alerts, tickets, and events. According to a report by AIOps Exchange, 40% of organizations are flooded with more than 1 million alerts per day. AI facilitates temporal association detection, discovering co-related logs, and combining events into a small number of logical groups.

Such noise reduction eases the burden off IT staff and enhances productivity by allowing them to look at a few critical incidents, instead of a large stream of insignificant events.

After root-cause analysis is complete and issues are captured, AIOps tools route such incidents to the relevant human experts for swift remediation. They automatically set a remediation workflow, in motion that enables issue resolution, even before human involvement.

As seen above, IT leverages advanced forecasting techniques, such as time-series forecasting to analyze historical usage and bandwidth, and predict future usage values, such as network throughput, server size, memory, etc. By predicting the usage in advance, AIOps enables organizations to purchase additional capacity and reserve instances to cope up with the demand in advance, leading to large cost savings.

Moreover, an estimation of the number of service tickets expected in the future facilities capacity building and resource allocation, allowing organizations to employ requisite number of service desk personnel within stipulated budgets.

Functioning as the backbone of modern digital transformations, AI lets organizations survive and thrive in today’s data-heavy and highly componentized IT landscape.

AIOps is an emerging solution that accurately predicts issues before they happen, locates anomalies in real-time, and reduces the mean-time-to-respond (MTTR) for incidents.

It saves time, money, and resources by significantly accelerating root-cause analysis and remediation and improves customer confidence and employee morale by avoiding downtime and maintaining operational continuity. Most importantly, it reinforces the role of IT as a strategic enabler of business growth.

For further insights, you might be interested in Acuvate’s AI-driven managed services (AiDMS) which is helping CIOs reduce organizations service desk costs, optimize cloud spending and automate and enhance IT operations through analytics and machine learning (ML).

If you’d like to learn more about this topic or planning to implement data analytics in your organization, please feel free to get in touch with our data analytics experts for a personalized consultation.

Rakesh Reddy is our co-founder and a serial entrepreneur. A mechanical engineer by education, his business vision and direction as Chairman & CEO drives us to excellence. An avid team player, he works with his executive team to trigger growth for Acuvate across geographies and business areas. His business acumen, strategy and planning skills catalyzed the growth of Acuvate since its inception. A natural leader, he has been able to successfully bootstrap his companies, help win customers and successfully constitute company’s board and a robust leadership team.

Responsible AI Practices Your Organizations Should 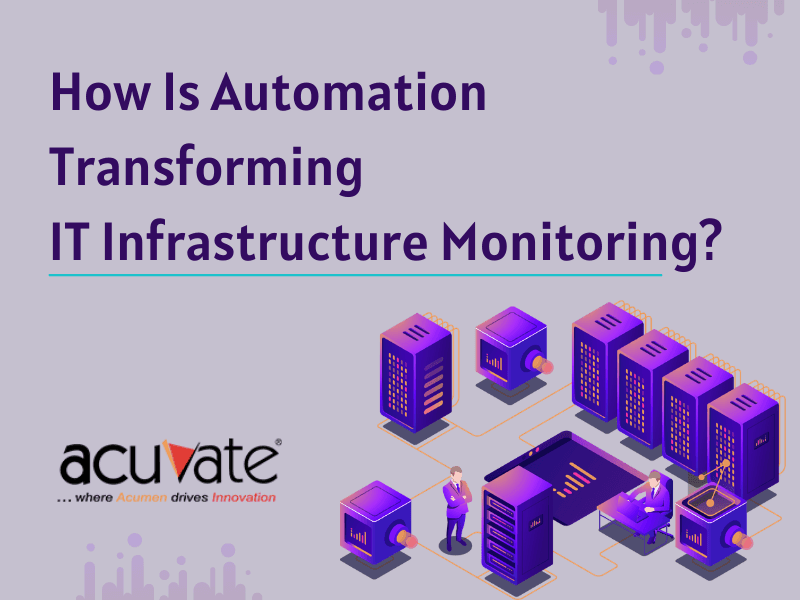 How is automation transforming IT Infrastructure M

How The Global Pandemic Disruption Is Driving AI A