Computers are everywhere. Whether it’s at your home, office, bank, hospital etc., computers have played an integral part in the smooth functioning of various activities for multiple decades now.

In an enterprise, computers are an essential for completing any task in an organized and timely manner. But just like any other machine, a computer too is prone to create errors (both software and hardware), caused by a variety of reasons ranging from virus attacks, improper functioning of VPN to IT issues etc.

To solve these problems, enterprises usually deploy an IT troubleshooting cell. But in most organisations, both employees and helpdesk staff find themselves quite frustrated with this solution. As the staff can’t handle all problems at once and usually aren’t available 24/7, employees get irritated due to the lack of timely help.

At the same time, IT helpdesk staff also finds it cumbersome when they are approached with the same type of problems every time, and which may or may not have a solution. As the size of an organization increases, the number of complaints and subsequently, waiting times also increase.

As a result the organization’s productivity decreases and you end up spending more money to hire new people. Going this route not only eats away at overall capital but your employees continue to lose valuable time.

Though a few organizations have created FAQ pages and user guides, such practices have typically failed because of the user’s reluctance to read them before approaching helpdesk for a ‘quick fix’.
This raises an interesting proposition though. What if you were able to provide your employees with instant answers and solutions to challenges they could be facing? The outcomes of establishing such a system could have surprising benefits. Think about all the time your employees will save without having to wait for an overburdened support staff member. And think about all the other important activities and tasks your support staff can focus on instead – IT issues that actually require human intelligence to be resolved!

How Can AI Bots Help?

One of the biggest advantage of integrating AI bots into your enterprise help desk is that employees can ask for help and get their problem solved during any time of the day/night. A human may not be present continuously for 24 hours, but by using a bot, Jane from legal department can quickly get her ticket addressed, with a single click whenever she wants. This permanent availability of help can save a lot of time for your employees and increases overall work productivity.

It is impossible for the IT staff to analyze each support request when they are a constantly flooded with a stream of tickets.. On the flip side, support staff productivity also takes a hit if their focus is shifted towards answering easy self-service or low value tickets.

The result?  Enhanced productivity from your IT support staff! Now they can spend their time and energy only on high priority issues which need their attention.

As the productivity of your staff increases, the maintenance of the enterprise’s help desk become cheaper. Even if the organization’s size increases, the help desk would be approached only for complex issues.

Integrating AI bots into your enterprise increases overall work productivity in the organization. Through a hassle free access to help and assistance for various day to day IT issues, you can save a lot of time, money and energy for your enterprise. A good AI bot minimizes, or we might even say, eliminates, the frustration of both parties – support staff and employees.

Also for a bot to be truly effective, it must integrate with all your existing applications. This integration helps to further increases employee engagement and collaboration on those platforms.

Are you ready to say sayonara to never ending calls between your IT support staff and other employees?

Are you ready to eliminate loss of time and productivity from your enterprise?

And finally, do you want to create a friendlier and far more efficient helpdesk for your enterprise?

Then an IT helpdesk bot just might be your answer. If you’re in the marketing hunting for one, then look no further. Check out IT helpdesk Bot – your on-demand intelligent assistant for IT support. 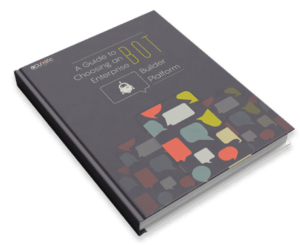 A GUIDE TO CHOOSING AN ENTERPRISE BOT BUILDER PLATFORM

Abhishek is the AI & Automation Practice Head at Acuvate and brings with him 14+ years of strong expertise across the Microsoft stack. He has consulted with clients globally to provide solutions on technologies such as Cognitive Services, Azure, RPA, SharePoint & Office 365. He has worked with clients across multiple industry domains including Retail & FMCG, Government, BFSI, Manufacturing and Telecom.

Why Chatbots Are The Perfect Fit For Mode 2 Of Bim

6 Major AI Use Cases in IT operations

6 Popular Finance Business Processes You Can Automate With RPA